There’s a lot of talk about “affordable” hearing aids, much of it in anticipation of the Food and Drug Administration’s final approval of an over-the- counter hearing aid. We don’t know the specifics of the future OTC hearing aid but some have speculated that the cost will probably be around $1000.

Comparatively speaking, that is affordable. The cost of high-end hearing aids is approaching $4000 (for one). $3000 is not unusual. Costco’s least expensive hearing aid is $999.  There are less expensive devices, many available online, some of which use the term “hearing aid”, but buyer beware. For some people, they may work well out of the box. Others may end up with hearing aids that aren’t really right for them. As for hearing-aid like devices, PSAP’s or hearables, for some they will be adequate but for others not so good. And if they are too cheap, a 2016 Consumer Reports survey found, they can actually damage your hearing.

But these low-cost alternatives are still a major expense for many Americans, especially older Americans.  Earlier this year a Federal Reserve Board survey found that 40 percent of Americans could not cover a $400 emergency expense without selling something or borrowing.  A $1000 affordable hearing aid is not “affordable” for 40 percent of our population.

Medicare does not cover hearing aids. Some Medicare supplement programs do, as do some other insurance policies. But that 40 percent who can’t find a quick $400 for an emergency probably do not have this level of insurance. The V.A. also provides hearing aids to veterans with service-related hearing loss.

For many, Medicaid is the only solution. Medicaid covers hearing aids for adults in 28 states, including New York State where I live. For a complete list of states and of eligibility requirements for hearing aids, based on the severity of the loss, see this recent article in Health Affairs. Coverage varies widely from state to state, as does coverage for associated services like hearing-aid batteries. 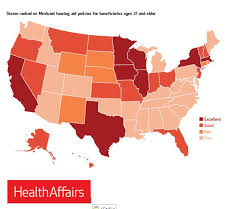 As the Health Affairs article concludes: older Americans “in states lacking comprehensive hearing health care coverage have few ways to access hearing aids or the professional services associated with hearing loss and hearing aid use.” As we know, untreated hearing loss is significantly related to other adverse health outcomes, especially in the elderly.

The Health Affairs study also found that over one-fourth of adults skipped necessary medical care in 2017 because they were unable to afford the cost.

So when we talk about “affordable” hearing aids, let’s remember that that is a relative term.

You can get it online at Amazon or Barnes & Noble, in paperback or ebook for Kindle or Nook. You can also ask your library or favorite independent bookstore to order it.