Skip to content
HomeWhat I Learned by Flunking Out of ASL

This past winter I decided to take a class in American Sign Language, ASL. It was a six-week course with a two-and-a-half hour class once a week. It was totally immersive – no spoken language allowed, even with the administrators. 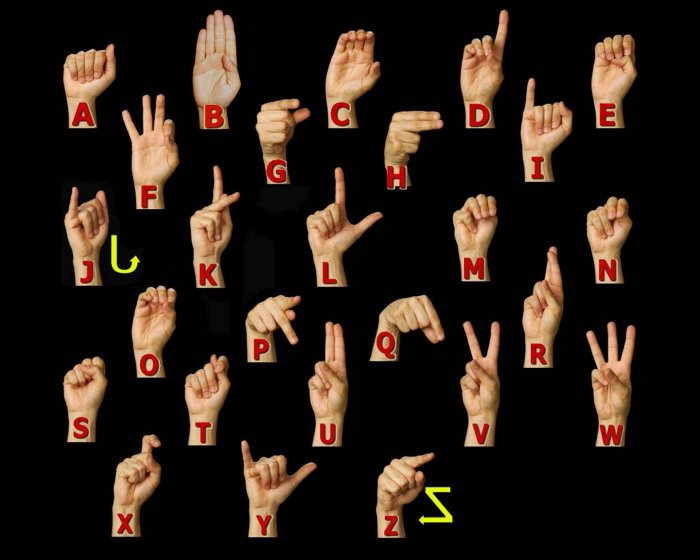 I took this challenge on for a couple of different reasons. The first was that I hoped to be able to exchange polite basics in ASL when I meet people who are Deaf. The second was to exercise my brain. Finally, ASL is a beautiful expressive language and in my work with the hard of hearing I often encounter someone signing. I wanted to see if I could pick up at least the most common signs.

We did learn some basics, but the class was geared more as an introductory level for people who intended to go on master ASL. In the first few classes we learned terms for discussing extended family. For instance, Is your cousin older than your brother? Who is her aunt? Are they divorced or separated? Is your youngest step-sister engaged? Clearly these are useful for conversation, especially as you get to know someone. But I couldn’t imagine myself ever asking about someone’s cousin. I found it hard enough to master father, mother, sister, brother, grandmother and grandfather to go on with other relatives.

Much of the class centered on student life. “May I borrow your slide rule?” In ASL (I think) this is “Slide rule me give?” Object subject verb, in that order. Online sources say you can use an alternate Subject Verb Object structure, which is more like spoken English, but not in my class. “Can you teach me English?” “English me teach? Help me need.” The tutor responds, “Yes. Me you pay?” (Don’t forget I flunked. This may not be correct.)

We did learn how to say Hello and Goodbye (just as you would in English, a hand signal of greeting and a little wave goodbye). “Thank you.” And “You’re Welcome” (which is “Thank You” back). “Deaf”, “hard of hearing,” and “hearing”. That was very useful. But “halter top”?

We learned how to finger spell. But we didn’t learn the alphabet from A to Z, we learned what seemed like random combinations of letters on different weeks.

The first few classes were fun. We played guessing games to increase eye-brain speed. About a third of each class was devoted to Deaf history (I did well in that) and Deaf Etiquette – some of which I was unable to comprehend. Repeatedly, in class and in quizzes, we were told that if two Deaf people are signing and you want to get past them, it is rude to walk around them. The proper etiquette is to walk right between them, without any acknowledgment that you are between them. I found this baffling but it was beyond my ability to ask about the logic of it.

My brain did feel more flexible, but only up to a certain point. We started out with six in the class, three women around my age, 50’s and 60’s, and three in their 20’s or early 30’s. One 60-year old dropped out after 20 minutes. The second made it through three classes. I made it to the end, my brain feeling ever more boggled.  Watching the teacher and then trying to repeat the signs is tricky. It’s a mirror image. It reminded me of what they always say about Ginger Rogers: She did everything Astaire did, but backwards, and in heels. Also, my aging fingers are just not as flexible as those of my 20-30-year-old fellow students.

When I spoke to the teacher about whether I should repeat Level 1 or go on to Level 2, he said I needed a private tutor. Whoa. I didn’t think I was that bad! I’ve never flunked anything. It’s humiliating!

My confidence immediately plummeted and I forgot everything I’d learned. But I didn’t want to give up so I started studying on line.

Here are some suggestions.

Print out a fingerspelling alphabet poster. Here are several to choose from. They are all free. Hang it above your desk. Teach yourself the alphabet. Then use  William Vicar’s Finger Spelling Practice. This is an increasingly difficult test-yourself site that is almost addictive. The words get longer, the fingerspelling gets faster. You can see your progress.

For those courtesy basics, go to Basic ASL: 100 Signs. The “student” in this video is a young woman who is competent but also charmingly modest and sometimes indecisive, and sometimes flat wrong. She makes you feel better about yourself. Want to learn how to count? Here’s a link.

There are many levels in this series, of increasing difficulty. You do it in your own time. I try to spend 20 minutes a day on practice, and I’m improving! My brain is also becoming more flexible. One unintended benefit is that my hand-eye coordination is improved, and it’s made a noticeable difference in my tennis game.

So I flunked ASL, but I learned a lot.

38 thoughts on “What I Learned by Flunking Out of ASL”